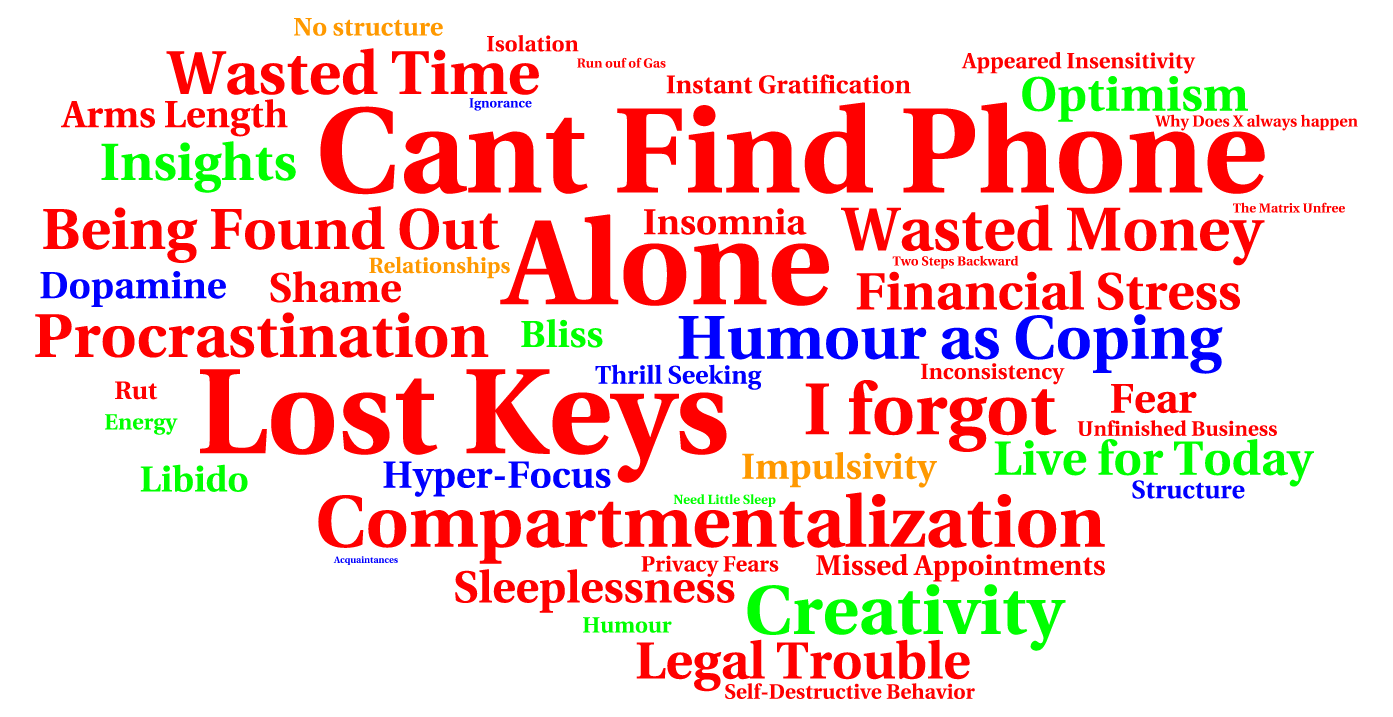 The difficulty with taking ADHD meds is each person reacts a bit differently with each medication and dosage level. In addition, ADHD meds work very differently for those with ADHD and those that do not have it. I’ve heard plenty of people mention this huge rush of energy when they take them, and no matter the dosage or brand or type, I never get that rush or energy level.. I’ve taken doses from 5mg to 60 mg of several stimulant variants and never had that, and so part of me wonders just how much the meds are working. Self-doubt can be killer.

The typical short-term reaction for those with ADHD is focus. But even that can be difficult to determine if it’s the meds or just other reasons (i.e. new job, excitement, etc.).   Longer term changes have to be viewed, which doesn’t work well for an impatient, impulsive person (e.g. ME), nor does it work well when you are an adult without constant monitoring by others to observe changes in your behavior. For me – realizing what works has been an exercise in ups and downs.

Below are three word cloud exercises I did. There is so much confusion on how one feels and thinks with these drugs. I still don’t know exactly WHAT I should feel and what is normal. So I wrote out a list of the top 20 or so words that came to mind in three phases – the first with No Meds. The second with Adderall. The Third on Dexedrine. These are the words that reflect my as-is life in those periods. I then ranked them in terms of how strong my felt sense was for each word during that time and then I assigned colors based on whether the word was Positive (Green), Negative (Red) or Neutral (Blue). This may better explain what was and is in my head during those times.

Papa Bear – too much anxiety and Jitters – Ritalin was the first hope (both Instant and Extended Release) but I felt nothing for most of the doses until they got higher and higher, and then it was still hard to tell if my focus was increased because of the meds, merely a result of some hyper-focus, wishful thinking or a result of some other dopamine rush, like completing late night, last-minute business proposals due the next day. The two constants with Ritalin once I got to the higher doses were a constant uneasy feeling in the stomach like butterflies and the consistency of inconsistent focus. Somedays focus was up, somedays focus was down. Many times, I also became very agitated. Not angry, not energetic, more just irritated or anxious and not able to relax. For those reasons I moved to Adderall.

Mama Bear – not enough…um…spit – Adderall was a revelation. Increased focus very quickly. Things that were daunting to me before became very simple. And it made sense, as these were simple tasks. But prior to Adderall, they weren’t simple to me, at least in terms of getting them done. An organized kitchen for example. Things just didn’t overwhelm. But as with the Ritalin, while the first few days showed increased focus (and hope), there was second guessing. Was it really the drug helping, or was it more my own brain deciding that I took the drug and therefore was adjusting itself? Side effects included major insomnia and poor sleep schedule (about 1 out of every 4 days with near zero sleep, another day or two with only a few hours and then one long sleep), increased blood pressure and other issues as the two amphetamines in Adderall (especially the L version) are vasoconstrictors, the occasional severe headaches where any movement would hurt and oddly the worst – major, pain-in-the-ass-world-class-dry-mouth.

Baby Bear – The dry mouth moved me to Dexedrine. Which many feel is less effective than Adderall. It may be slightly less effective in my case but, so far, appears to have almost zero side effects. And instead of 60mg of Adderal XR, I am taking 45mg of Dexedrine. The focus period seems to be smoother. Fewer side effects, although of late, I’ve noticed Hyper-Focus seems to be a bit rampant again (as opposed to good ol’ normal focus), the effects don’t last as long, and unfortunately, since this is an older drug with less profit, the pill variety isn’t as great to adjust your dose. So I have to get three pills a day instead of two. It doesn’t sound like a major issue except for the fact that Insurance Companies limit your meds, often, by the number of effing PILLs and NOT the dosage. Here are the world clouds.